Here is a summary of the major changes in Script Debugger 7.

Once a demo period concludes, Script Debugger 7 will go into Lite mode. This is intended to be a viable replacement for Apple’s Script Editor without many of Script Debugger’s important features (debugging, exploring, ASObjC, and others).

In Lite mode, you get all of Script Debugger’s editing tools and access to its dictionary views. You can create, edit, run and save scripts. 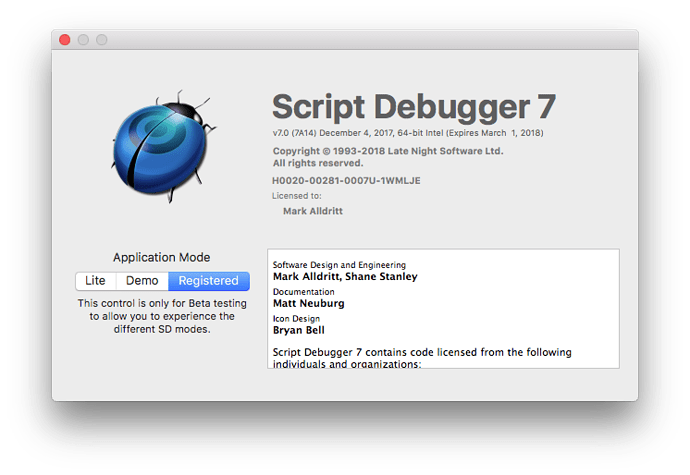 During Beta testing, the Script Debugger 7 About box provides a control to switch between Script Debugger’s 3 modes so that you can experience the differences between them all. Note that Demo and Registered modes only differ cosmetically.

Script Debugger allows you to review and open past versions of a script from the Mac OS X document version history provided both locally (on volumes that support Mac OS X Versions) and via Time Machine backups. You can even execute different versions of your script right from the Versions browser before deciding to revert to a particular version of your script.

Script Debugger’s bundle editing facilities have been expanded to provide greater control over the appearance and operation of script applications. 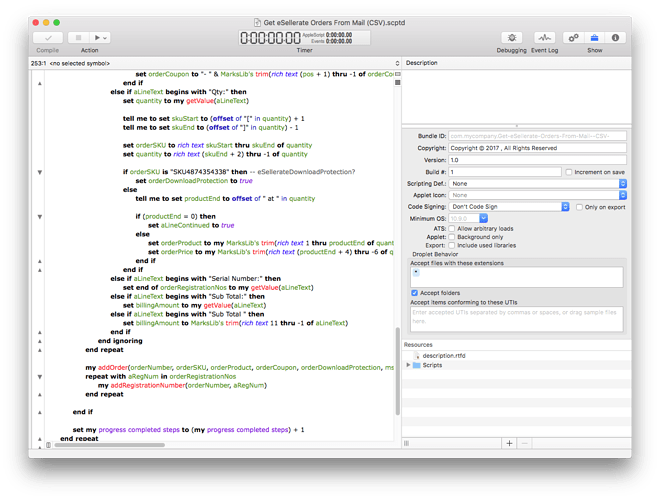 Previous versions of Script Debugger’s explorers allowed you to edit the value of properties and have the effects of those changes reflected in the target application. Script Debugger 7 takes this further by allowing you to move, copy/clone, delete and create object instances directly from within Explorers. This allows for much more experimentation and discovery of an application’s capabilities without having to write a line of code.

In combination with the new mutation capabilities of Explorers, Script Debugger 7 provides the ability to record the AppleScript code corresponding to the mutation changes done using the Explorer. You can use this facility to record AppleScript for almost any application.

As always, we are going through the accumulated bugs that are too involved to address in maintenance release or require UI changes and resolving as many issues as we can.

Yet to be determined, other than Script Debugger Lite mode will be free to use.

2 posts were split to a new topic: How to test the the ATS setting