How to authorise InDesign to control Finder and System Events?

Hi,
i have this shiny new MacBook Pro M1 upgrading from my old MacBook Pro mid-2012 !!
It’s lighter, speedier, better all around… BUT
I install apps one at a time to make a manual clean install. InDesign CC 2021 & Script Debugger 8 were part of the first batch of installs as i’m mostly develop AS scripts for InDesign.
A script that i develop right now is working well on my old computer and stopped working when run from InDesign on my new computer.
What i found is that it throws errors (-1743 “Not authorised to send Apple events to System Events/Finder”) when it encounter a “Finder” or “Apple Events” tell block (the apps other than InDesign that i call in my script).

I searched online, compared the 2 computers and found that the automation panels of the security preferences were different (see captures below): 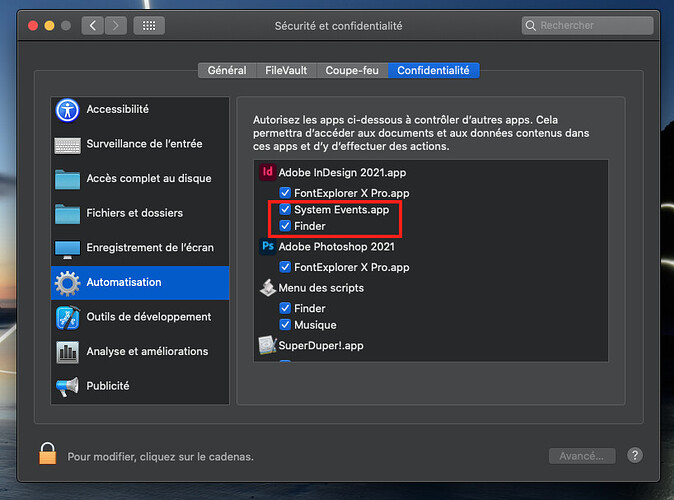 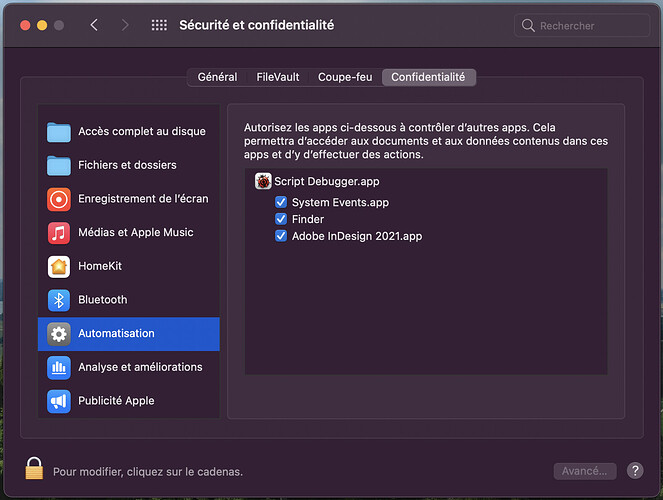 my script begin with those use lines (if useful for the resolution of my problem?):
use AppleScript version “2.5”
use framework “Foundation”
use scripting additions
use BP : script “BridgePlus” version “1.3.4”

Thanks for your help!

You should be prompted to grant access the first time you script one of the apps from InDesign. I suspect the best solution is to use the tccutil tool to reset the privacy database. A quick Web search will give you the details.

I had some of those dialogs from launchings scripts inside Script debugger (i think) but none when launching scripts inside InDesign.
I’ll check that tccutil tool if it helps and ask the same question in the Adobe forums.
Thanks for the reply.

Is your script saved as an applet?
If not, do you run it from Indesign script palette?

yes i save them as compiled scripts and run them from the InDesign palette.

As Shane says, you’ll have to reset the authorizations.
Have a look here: tccutils

In the meantime, you can re-save your script as an applet using SD: it will automatically add access requests for your needs in the info.plist file.

[Applets can be run from InDesign palette.]