I’ve encountered this at least ten times since the update to 6.0.2. It is a state in which most, perhaps all, functionality is disabled and the only “out” is to force quit Debugger. You can see what’s disabled from the menu grabs below. For example, “Quit Script Debugger” is disabled.

I’ve seen this occur in two situations: (1) at random points in time from first launch to after an hour or more and (2) when a dialog box is displayed by Debugger. In the latter case, in addition to the menus being disabled, any buttons in the dialog are also disabled, so it can’t be dismissed. In either case, force quit is the only exit. Thank goodness for Debugger’s ability to restore the pre-hang status of scripts, saved or unsaved!!!

Of course, this doesn’t always happen. I can sometimes complete an editing session without incident. Other sessions require force quits every few minutes. Both situations can affect the same script at different times, so I don’t believe that script content is a factor. Console shows no log entries for Debugger at all, so the issue seems to reside within Debugger only and doesn’t extend into the System.

Has anyone else had this happen to them? Any new symptoms or thoughts to add? 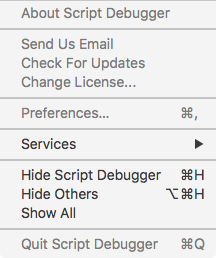 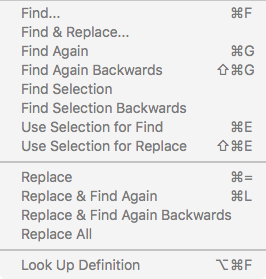 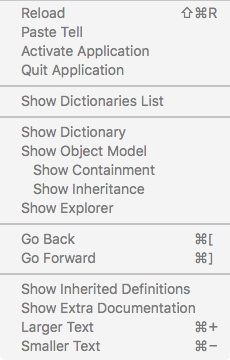 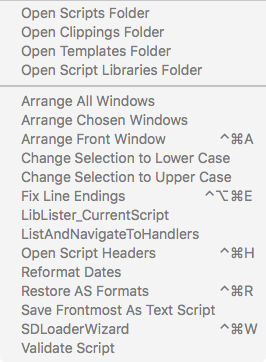 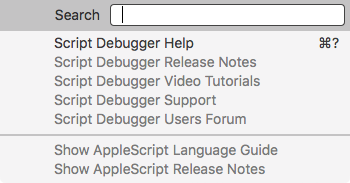 Yes Stan, I just posted my discovery of this issue as well. Just started yesterday which is, if memory serves, the day I updated to 6.0.2.

This just started happening after updating to v6.0.2 yesterday. 2011 15" MBP, 16GB, running 10.10.5. A compile error dialog came up, and neither typing Command-Period nor clicking the cancel button would dismiss the dialog. As a result of that I went to restart SD and the “Quit Script Debugger” menu item was greyed out, so I did a force-quit. Just now, I wasn’t even working in SD though it has been running most of the day, in attempting to double-check the version information of SD for this post, I’m seeing the same behavior - only the bottom 4 of 5 menu items in the Script Debugger menu are available, all others are greyed out. Various other menu items are greyed out as well - including “New Script” and almost all items on the View-Help menus. And I’m not seeing any unusual behavior in any other apps on this Mac. At this point I have no other data as far as what operations preceded this behavior and have.

I had the same issue, same build of SD.
After a script error, the Cancel button won’t dismiss the error dialog and several menu items are greyed out, including the Quit menu.
Force quit is the only solution.

I believe I have resolved this problem for the upcoming Script Debugger 6.0.3 maintenance release. If you are a member of the beta testing group you can download a pre-release 6.0.3 build here for testing.

I just posted same issue new topic. Why not make the beta avail or post the previous version so we can downgrade? I am forced to test in Applescript Editor which really stinks.

Since I updating SD to 6.0.2 when in Debugging Mode I can no longer hit the cancel button on an error. In standard mode it works fine. I am running OS 10.11.

I am forced to test in Applescript Editor which really stinks.

I apologize for the interruption in service. The problem has been corrected in the Script Debugger 6.0.3 maintenance release. You can update within Script Debugger using the Check For Updates command or you can download a fresh copy.