What causes Numbers to pop this dialog (and how to stop it)?

I have a Mail rules script that parses the contents of certain emails then populates a Numbers spreadsheet.

Alas, when Numbers populates a line it then also throws a dialog for each line saying it’s 'Downloading ’ with a progress bar (which never moves, but that’s by the by). 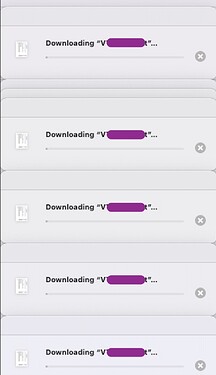 Most annoyingly, there’s no way to dismiss these alerts via the keyboard (escape key doesn’t work) and I have to click each one individually, which is time-consuming and irritating. At times, there’s a couple of dozen of them to get rid of. I can’t automate getting rid of them either, because when asking Numbers for all windows it only sees the 1 window that is the sheet.

I would like to stop these alerts from popping up entirely; there is no content to download, the sheet lives on the local machine (Though it was once in iCloud; I moved it as I thought that might be the issue, but the nuisance persists).

The content does contain URLs, and I have unchecked the only pref I could find in Numbers (‘Paste Youtube and Vimeo links as web videos’ - this isn’t relevant anyway as the links are not media) to no avail.

I have used this script on other email content before without problem; that content did not contain URLs so I’m assuming it’s related to that somehow. However, since the URLs are essential to the content that I need to scrape, getting rid of them isn’t an option.

I don’t know why Numbers thinks it needs to download anything, or how to prevent it so at this point I’m out of ideas. Any suggestions/insights gratefully accepted.

Just thinking…
Could you convert the urls in strings?
I mean, delete the scheme part (http & www).