When I manually copy the script library to /Content/Library/Script Libraries the application works as expected. It is just not included in the export read-only - enhanced application export process.

Any ideas or suggestions would be greatly appreciated.

Under the File Menu>Bundle and Export Settings

Is the box for “Include used user script libraries” checked? 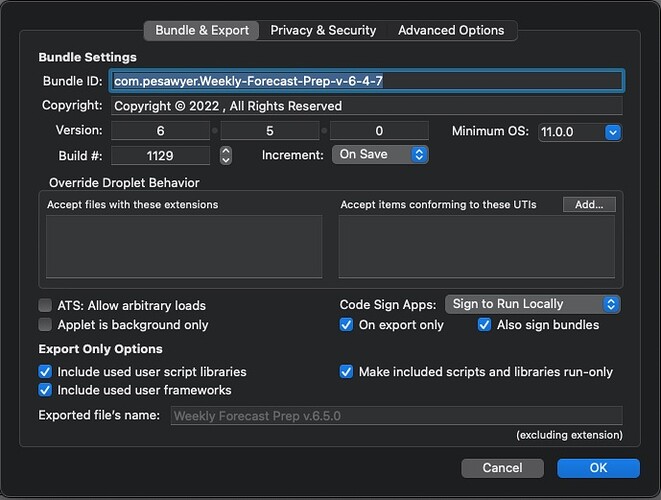 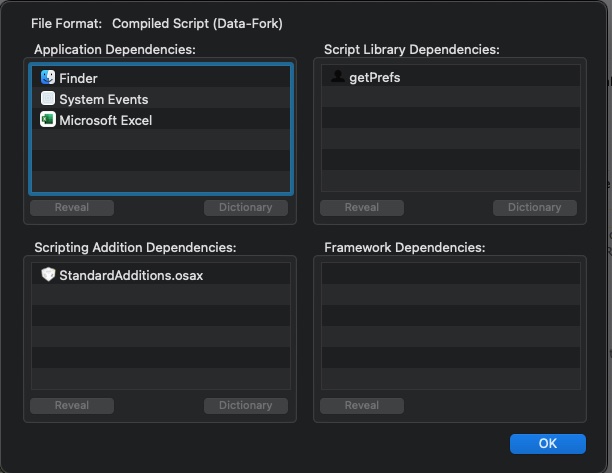 Would you be able to send me an example? The lib, a file that uses it, and what gets exported? Thanks.

You’re saving an existing app. Is it Notarized?

What happens if you save as a new app?

Do you mean “sign to run locally” as being Notarized? Maybe I’m missing something on that subject but thought that’s all I needed to do.

I had the original script saved as a “compiled script” then I edited it to use the script library.

Just now copied everything from that script and pasted it into a new script, saved as Application Enhanced, then export read-only and the script libraries are included in that export. But I truly don’t understand why it wouldn’t work with the original script when it was saved as a compiled script.

No, Notarized is a step beyond that which involves sending it to Apple and getting their blessing.

Why it’s working on a new App, but not an old one is beyond me. @ShaneStanley ?

I think I’ve identified some of the behavior I’m seeing.

Was my issue simply that I was expecting to export the script libraries from an .scpt script?

This behavior is confirmed as a bug to be fixed in a later version of SD. As a workaround I’m using a compiled script bundle.

It should work, but you may have identified a bug. The settings aren’t stored as robustly in a .scpt file, but as long as they are showing, they should be honoured. Let me look into it further.

Just to confirm, this is a bug, and will be fixed in a future maintenance release.

As a side note - Ed inspired me to do better, I’m now set up and successfully Notarizing my apps with SD Notary.

This topic was automatically closed 3 days after the last reply. New replies are no longer allowed.