Unable to save file in iCloud

I try to save an attachment from an email to a folder in iCloud.
First I put the path to the mobile documents folder:
set MobileDocumentsPath to POSIX path of (path to the library folder from the user domain) & "Mobile Documents/"
Then I set the variable savePath: set savePath to MobileDocumentsPath & originalName
The savePath variable is:
/Users/jjn/Library/Mobile Documents/xxxxxxxxxx.20161026.html

Then I get the following error message (in Dutch):
Om bevoegdheden te bekijken of te wijzigen, selecteer je het onderdeel in de Finder en kies je ‘Archief’ > ‘Toon info’. (-10000)
Translated is that about:
"To view or change permissions, select the item in the Finder and choose ‘File > Get Info’. (-10000)

It might be a trivial problem but I don’t see the solution.
Manually moving the Attachment is no problem.
Saving the attachment in a folder on the Mac with similar code also gives no problem.

You can’t save into Mobile Documents directly like that – it’s not really a folder.

If you look in the Finder: 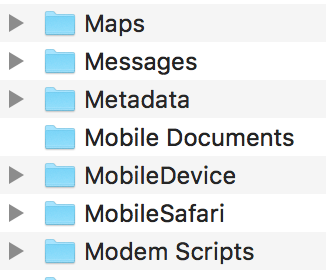 you will see it even appears differently (no arrow).

I’m not sure what the work-around would be.

It works if you save to the “Documents” folder (at the end of the App’s cloud path).

For example this works:

Thanks Tom. The file is indeed saved in the map Teksteditor (Dutch name) but I want save to the file in a own folder, by example: documents/private.
Thanks Shane. There is a work-around via Hazel. If Hazel succeeds then it must be possible via Applescript or am I totally wrong.
Thanks Phil, I have tried the way you suggest but with no result.

The file is indeed saved in the map Teksteditor (Dutch name) but I want save to the file in a own folder, by example: documents/private.

If you see the App’s folder in the “iCloud Drive” you can simply create a subfolder:

Then change the path in the script accordingly and it should work:

The “Subfolder” is in fact a subfolder of …/TextEdit/Documents. (The App’s Documents folder is displayed as the App’s root folder in the iCloud view in the Finder.)

Tom, I want save the file in a subfolder of a folder on the same level as the TextEdit folder.

I have found an work-around that fits me:

I save the attachment in an folder (user/jjn/Bijlagen) on my Mac with the statement:

Then I move the file to the cloud folder Documents/Prive

Perhaps somebody knows a faster way, suggestions are welcome!

Perhaps somebody knows a faster way, suggestions are welcome!

It would be good to know your system version, because the iCloud Drive stuff has changed over the last years.

So, your script wouldn’t make much sense for me, and vice versa.

With only AppleScript I can’t move the file, with the shell statement I have success. It’s my first script and I haven’t time to search deeper for an ‘AppleScript solution’.
I’m glad to have now a flexible solution, so I can continue with the script.

Then I would simply use the “regular” path ~/Documents/Prive, or, in AppleScript: (path to documents folder from user domain as text) & "Prive:"

This would be your File Moving action as AppleScript:

Tom, you are completely right. Thanks very much.
The whole topic is a non-topic and I’ll try to remove it because it causes confusion and I’m a little ashamed about it.

The whole topic is a non-topic and I’ll try to remove it because it causes confusion and I’m a little ashamed about it.

It’s nothing uncommon that a topic becomes a “non-topic” once you know the solution. It’s not uncommon either that the solution turns out to be simpler – or different – than thought; that’s rather a good thing, nothing to be ashamed off. IMO.

Besides that, the topic holds some information that might be useful:

I agree with Tom in his reply to your post. I posted something not to bright about putting pipes around something that once Shane posted a reply I instantly see what I did was wrong. But there might well be other people who would think of what I thought and if they read the posts on that they will know to not do that. Posting is about sharing what you know, and learning from others. There’s nothing to be embarrassed about. Like Tom said people can learn from the posts in this topic.

This topic is going to recur repeatedly with Sierra and iCloud syncing of Documents and Desktops folder. This thread is a great reference.

Now I can save an attachment in the Documents root but not in the folders.

Then I get again the following error message (in Dutch):
Om bevoegdheden te bekijken of te wijzigen, selecteer je het onderdeel in de Finder en kies je ‘Archief’ > ‘Toon info’. (-10000)
Translated is that about:
"To view or change permissions, select the item in the Finder and choose ‘File > Get Info’. (-10000)

So the first two commands succeed ant the third gives the error:

What’s going wrong and how can I repair this?

Today (2017-01-04) I tried it again and now also the first save failed.
Perhaps it’s an setting on my iMac but I haven’t changed anything. It’s a mystery for me …

*) The problem in the topic ‘Emails not processed by script’ isn’t resolved.