This post is unrelated to Script Debugger and AppleScript. I’d just like to know other scripters’ opinion on some questions I’m really struggling with.

I’m planning to get a new mac (currenty running a Mid-2012 MacBook Pro with Mojave) and have some questions:

Pete, I too have been slow to upgrade, for various reasons.

I upgraded to a new Mac about 2 years ago (when I started working from home more) and then upgraded to what was then the current Mac OS.

Based on advice and experience I did not clone my old Mac to the new system but did a clean install of the OS, and installed the apps I use and copied the folders and scripts I use. I believe this helped me avoid a ton of headaches, but it did take some time. I have been using Time Machine since it came out, and still do, but have not found it reliable as a system backup. It is great for finding previous versions of software, etc.

For a full system backup I use CarbonCopy cloner, and have it scheduled to backup weekly. (Time Machine is running too so I feel I’m covered.) You could also schedule CC to run daily.

My Time Machine was originally on TimeCapsule (Apple’s NAS) and that was fine, but now it’s on a system from WD that seems OK, but not as always there as TC was. The CCC backup is to an ExternalHD connected via USB, which is much faster now than it used to be.

I don’t partition drives anymore. It seems to make them difficult to use.

I have a two drive 4Tb Terramaster RAID 0 that is dedicated to Time Machine, Also have a similar twin drive device (Silverstone) with 2 x 3Tb drives that are used to backup the contents of a Mojave VM using Carbon Copy Cloner. I also have a Backblaze subscription that maintains a mirror of selected drives.

In short, all of my backup plans have failed me when needed most - to recover from a calamity. Except for Backblaze. That service has saved my bacon more than twice. Highly recommended.

I agree with @publiclee re Backblaze. If setup properly it has never failed me and well worth it.

In regards to Cloud Based Storage Space, have been very pleased with Box’s speed. I have automated for some clients using it to store files, open and save files, logs both hidden and visible and acting as local storage using a blend of AppleScript and AppleScript Objective C. We tested and compared to network Cisco server access and it out performed at the time.

@publiclee and @dean, I’ve never used online backups but think I’ve read on the DEVONthink forum that Backblaze doesn’t back up meta data (e.g. Finder tags). Are you aware of that?

Some new questions. Not sure whether it’s a good idea at all, but I’d love to have a simple backup strategy, i.e.

Not sure whether that’s possible, but if it was it would probably be fail-safe for me (currently very lazy with backups as I always need to attach external disks). 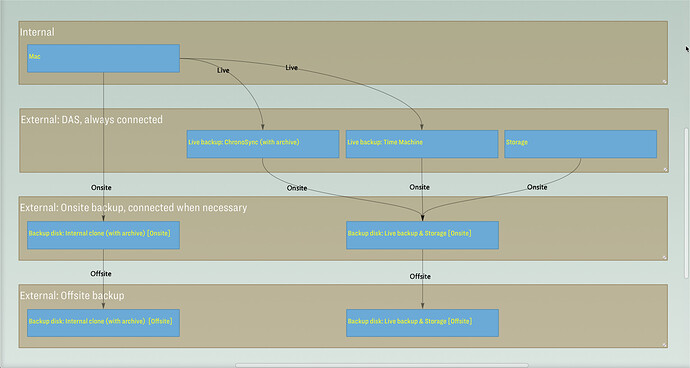 What I’m trying to accomplish

After reading a lot and also reaching out to ChronoSync support it seems: