So I guess this is a bug report, but there’s a couple of wider questions here.

It came up on some of the security forums that this hack/trick/feature to reveal keychain passwords still works on Sierra, and probably High Sierra too:

This afternoon, a friend learned the hard way that you don’t let an unofficial company take control of your computer to provide “support”…

(though in Sierra at least you need to remove the ‘of group 1’ part in the click command line).

Someone then mentioned that they thought Apple had made changes to stop malicious actors from scripting SecurityAgent windows, and I was sure I’d heard that too, but after doing a bit of a google searching, and searching ASUsers, I couldn’t find any mention of it.

Having tested the above-linked trick and found it worked, I wondered if maybe it was just Security windows that needed a password filled in that had been blocked, but no. In Script Editor, if I get an app to throw a password request dialog, this script will fill out the password and click the ‘OK’ button without issue:

This is the kind of window I’m talking about: 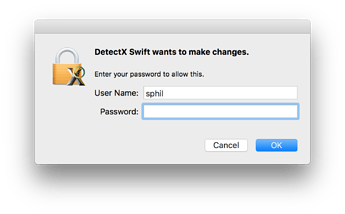 In Script Debugger, however, the password is filled in, but then SD crashes (well, I should say it quits unexpectedly). Relaunching Script Debugger and running the same script again (the same Security window is still open, with the password filled in from the first run of the script), SD now clicks the button as expected and doesn’t self-terminate.

Why SE will do this in one pass without self-termination but SD doesn’t, I’ll leave to you guys to figure out! Hopefully you can reproduce it your end without the crash reports, or I’ll have to set it up on a VM machine in a virgin account.

That leads me to two questions:

Hopefully you can reproduce it your end without the crash reports

Yes, thanks. Quite odd.

I notice that Little Snitch windows are completely opaque to System Events and GUI scripting. Neither SD nor Accessibility Inspector can introspect them at all. How is that done?

I’d imagine it can be done by doing the UI in your own code, bypassing normal controls. You might also be able to things via the accessibility APIs.

did I hallucinate the whole ‘Apple blocks scripting on security windows’ thing (if so, I wasn’t the only one)?

No, I didn’t dream it. I wonder what ‘synthetic clicking’ means? Using key codes perhaps? Seems odd that it still works.

Just to complete the story: It appears that Apple re-enabled the ability to perform synthetic clicks in 10.11.5.