I’ve been toying with the idea of producing a Script Debugger 6 t-shirt. Here’s what I have so far: 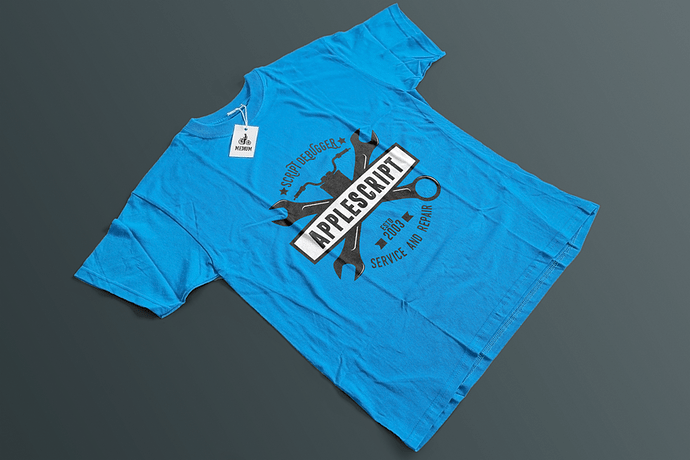 What do you all think?

Who is your favourite on-line t-shirt printing service?

What is the purpose of providing this T-Shirt?

Sorry, but when I look at the image, all I see is “AppleScript”.
It does not inspire me to ask the wearer anything about the shirt.

“Ask me how I got rid of all of my bugs”

Oops, posted the wrong mocha of the t-shirt. It should be black ink on blue: 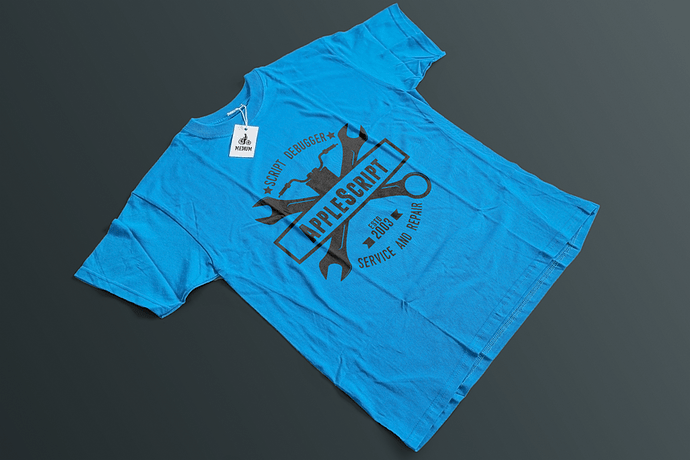 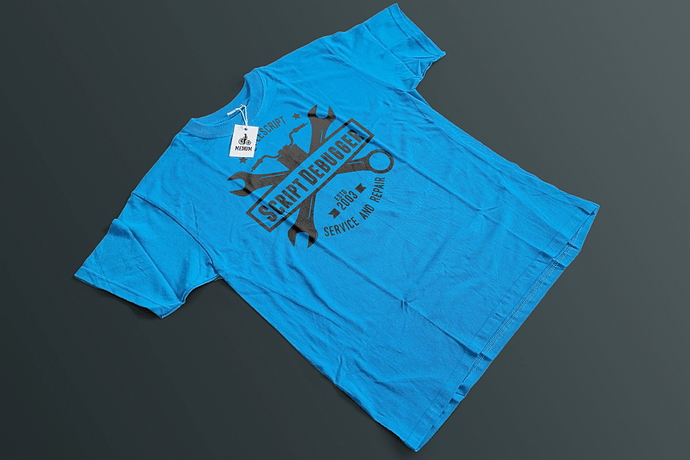 I don’t have a black & white version of the ladybug. I’ll have to see what I can come up with.

Much better, I reckon.

I wonder if a 6 might not go astray, to put it in some context.

That last one looks good but I agree with Shane, it needs a 6 somewhere.

I’d rather see something more understated on the front: The LNS logo in the pocket area, and something like “Serving the Mac community since 1995.” That’s an impressive history.

Then on back some information about SD, including the bug. Part of this may be my own needs, because I can no longer wear t-shirts with a lot of ink coverage, especially on the chest.

I’ve only used cafepress.com, but have had good experiences. The shirts are not cheap, but you don’t have to order in bulk, which is very nice. Individual users can order on their own. There is no extra charge, I believe, for full-color. So using the color bug on the back is feasible. The color bug will attract the attention, and then the marketing person in me says you should put some text with a brief description of SD6.

And, yes, definitely include the version number. It is our way of dating things. I think I only recently threw out my QuicKeys 2.0 shirt a couple of years ago.

I like that text! (for the back). Maybe something like “Script Debugger 6 — squashing AppleScript bugs line-by-line.” Or something like that, to highlight one of its best features.

I too prefer the second version. I would not add anything. No version number or any other text. I’d keep it very simple and too the point.

I agree with Ed – the design is fine. Plus: adding the version number is unnecessary and would ‘obsolete’ the shirt when v7 comes out.
But why "Established 2003’? That’s selling SD way short.

Oops, you are right. I meant that to be 1993 - that’s the earliest copyright in the source code. 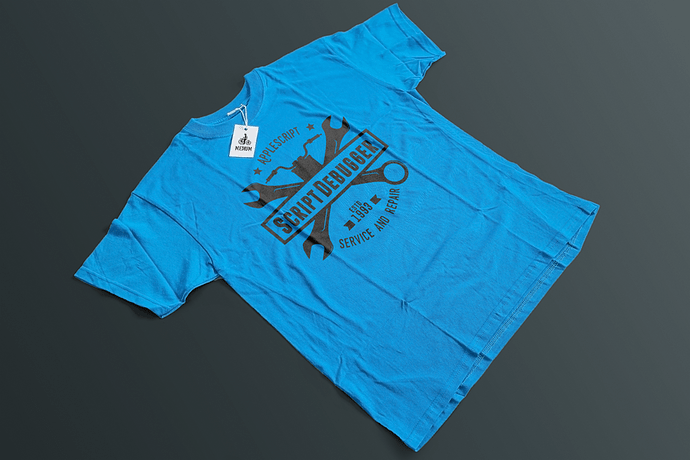 The very first thing I noticed was there was no ladybug. Also the name ScriptDebugger doesn’t really stand out in any way except bigger letters. I would expect the name to be a center of focus. The ScriptDebugger on the shirt almost blends in rather then stand out. But using only one color is tricky. You can only use things like different fonts, a different type of background inside the box that has ScriptDebugger, make the white space bigger around the word ScriptDebugger which would required making the box around the ScriptDebugger bigger while leaving the the letters inside the same size, … Nearly all the T-shirts I’ve seen find a way to make the product name stand out a bit. Every place I’ve seen where programmers gather the T-shirts seem to have a disportioncate amount of extra large shirts being sold or given away. So don’t forget big shirts : ) Then of course there is the big mechanical issue, the cylindrical shaped distributor cap has been replaced by the boxy shaped Ignition Control Unit : ) I assume the thing in the middle, above ScriptDebugger, is a distributer cap and spark plugs. Sorry my very first job was an auto mechanic. I couldn’t resists the wise crack : )

I like it. Given it says “Script Debugger” nice and large on the front, the ladybug is meh.

as far as POD services for shirts, I’m rather fond of zazzle.

If you wanted to be clever you could include a tiny, life-size lady bug representation crawling on the word AppleScript.