I am not that familiar with Script Debugger as I have only been using it for a few days but I must be doing something wrong as I keep getting Runtime Script Error. 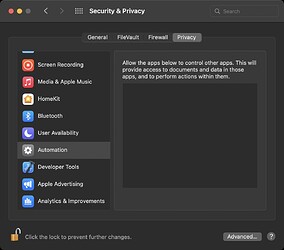 Now… when I make the app using Script Editor I am presented with a dialog asking for me to allow the application through and when I choose Allow, it is getting added to the above dialog.

Is there something I have missed in Script debugger to allow this to happen which the Script Editor is doing automatically ?

You don’t appear to be doing anything wrong. What version of Script Debugger? Can you send us a sample enhanced applet that demonstrates the problem?

I think I have it working now.
I started again and created a New Enhanced App script and pasted in the code from my backup txt file and it now adds the app into Systm Preference as expected.

I shall keep an eye on this one and if it does it again, I will send the project over to you for investigation.