Put Markers inline with everything else

Being a longtime Xcode user, I’m used to putting things like:

between functions/methods, which makes it much easier to find groups of similar functionality within a file. The bookmark Interesting Stuff Here will then appear at that location relative to other things in the function popup.

ScriptDebugger offers Markers, but they appear at the top of the function popup, making it less helpful. Could you change it (or add a pref) so that it behaves like Xcode, putting the Markers inline where they should appear?

I’ve filed an enhancement request at this end for this.

In case anyone missed it, this was included in 6.0.2: http://latenightsw.com/script-debugger-6-0-2-released/

I can’t get this to work in 6.0.2. My “Sort table of contents menu alphabetically” is turned off, and I’ve set PrefNavigationMenuMarkersInterleaved to “YES” and 1. Neither seem to affect the popup. The one marker I have in my test script is “–>> Command handlers.” It happens to be between all of the Folder Action type handlers and my own custom function type handlers (“on doStuff(param)”).

Here’s a screenshot – how does it differ from what you’re seeing? 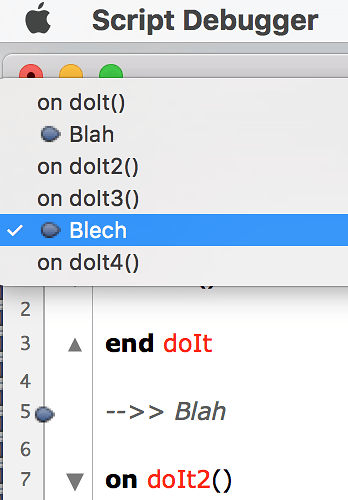 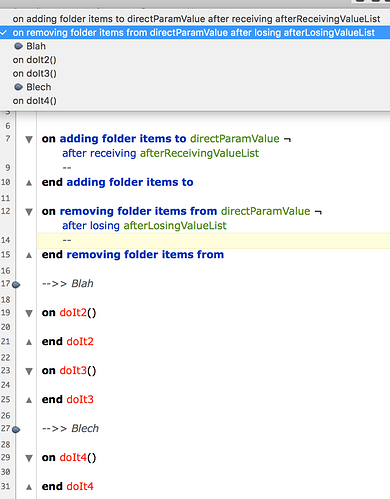 I really wish this would’ve been added as a pref in the UI instead, because every time I get a new machine or whatever, I’ll have to go searching for this thread or try to remember which release notes to look for to find the name of the pref.

Was that a forgot-to-set-it-back-before-release mistake?

No, it’s deliberate. Version 5 was com.latenightsw.ScriptDebugger5.

That was beyond what was essentially a maintenance release.

every time I get a new machine or whatever, I’ll have to go searching for this thread or try to remember which release notes to look for to find the name of the pref

This is a really welcome feature. Thanks to Mark for putting it in.

How about more tabs and a search / filter field in the Prefs window? TextWrangler seems to get away with it (though like SD and SE it also has a ‘Default Window’ setting too, a mechanism I really don’t care for that much).

Incidentally, is it documented anywhere (aside from the casual mention by Steve above) that the way to use this is with

Go to Help and search for Navigation.

You’re totally correct. Secret prefs are only the correct way to do things when they’re dangerous. Hopefully this (and others) will be added to the Prefs window soon. I a,so agree that SD’s Prefs window is becoming unruly. This function popup shouldn’t be part of "editor"prefs. It should be part of a navigation group or something like that.