Howdy folks, pretty new to the forum here and to AppleScript in general. I was referred here by @ccstone over from the Keyboard Maestro forum when he turned me on to Script Debugger and UI Browser.

After some tinkering I came up with a script that checks the DND status using the menu bar icon, and saves it to a variable. It works great for me, but am curious if it works for other people and their setups as well. Since it reads one of the attributes of the menu bar icon, I imagine one of the requisites is to have the menu bar icon actually visible there. So I am wondering what proper etiquette here is to asking others to check my script and let me know if it works, of how it can be improved.

Below is the actual script if anybody wants to see it. Any feedback whatsoever is more than welcome, and apologies in advance if a newbie like me isn’t supposed to post scripts.

Welcome. One small matter of online etiquette: it’s generally better to post your question, at least initially, in just one place, so people who monitor multiple venues don’t get spammed.

macOS Big Sur … DND was showing only in the “Control Center” (by default) and gives this message when your script is run:
System Events got an error: Can’t get menu bar item “Do Not Disturb” of menu bar 1 of application process “Control Center”.

IF I ADD DND to the actual menu bar as a separate item, then it runs without error, and reports whether DND is enabled or disabled (but doesn’t report "one hour, until this evening etc.)

If I remove DND from menu bar and leave it only in Control Center, I get same error “can’t get menu item.”
I imagine many users, like me, would NOT add it to menu bar separately, since it is so convenient in the Control Center.

Thank you for your feedback! I’ll look into if I can script it for control center and make it read whichever one is available.

I wasn’t able to edit my original post but here is an updated version that returns a warning if the DND icon is not present in the menu bar. I haven’t had time to look into scripting the Control Center.

That works nicely for me.

Thanks for letting me know!

So I finally had time to look into scripting the ControlCenter itself instead of the menu bar…and using UI Browser I took a look at the items here, and the DND portion returned the exact same path as the menu bar icon… 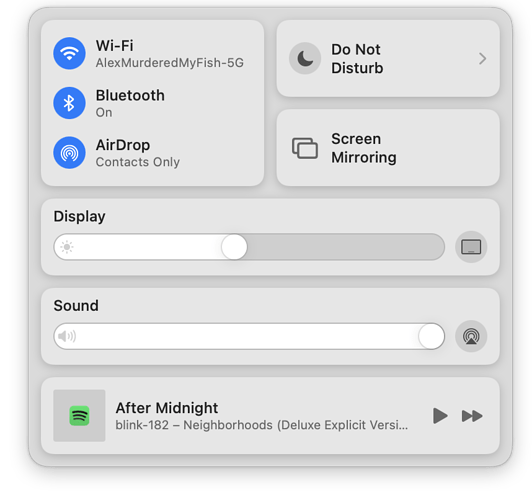 Any ideas as to why the ControlCenter portion is the same as the menu bar icon?

Is it actually, though ? Have you confirmed that the script will work without the menu bar icon, because someone above said it dip was reliant upon that in their testing.

I haven’t tested that personally. I just thought it was odd that UI Browser indicated that the ControlCenter element had the exact same path as the menu bar icon. Maybe that would change if I removed the menu bar icon though; I’m not sure. I’ll take a look at it tomorrow!

Just for a bit of contrast: 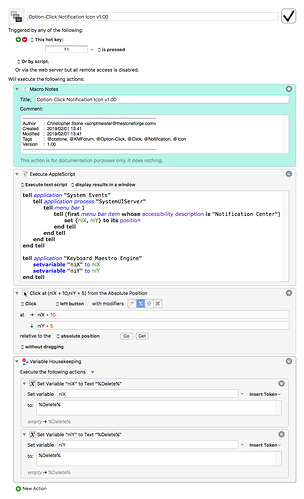 Turn on Do Not Disturb while using certain apps

Hey @jessestarrphoto, What happens when you manually Option-Click the Notification Icon in the Menu Bar? On macOS Sierra10.12.6 this will toggle the DND status On/Off. Mojave has played havoc with macOS automation in a variety of respects in the...

You can also set a keyboard shortcut in the macOS System Keyboard Preferences under Mission Control.

It may be faster to get the status of DND with UI-Scripting, but the appended AppleScript is quite fast on my old 2012 MacBook Air with Mojave.

Here’s where I got the idea:

I’m going to presume that an equivalent call to defaults won’t let one write the setting, or is it such that the notification centre then has to be killed and restarted, which would be visually quite jarring ?

or is it such that the notification centre then has to be killed and restarted, which would be visually quite jarring ?

It would seem that I missed this.

I hate terminating processes arbitrarily when other decent options exist.

I did try using the System keyboard shortcut with Keyboard Maestro, and it did not work on my Mojave system.

But then on Mojave it’s not a problem to Option-click the Notification Center icon in the menubar with Keyboard Maestro.