How Can I Detect When I Have an Ethernet Cable Connected?

Given the Network Preferences, and AppleScript support for that, I thought this should be straight forward. But I can’t find an AppleScript solution, even though I’ve searched extensively. 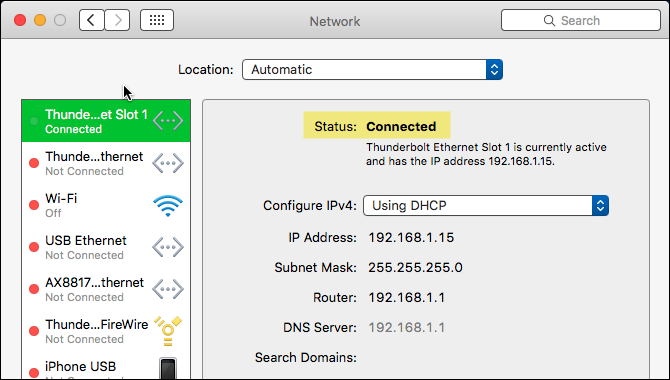 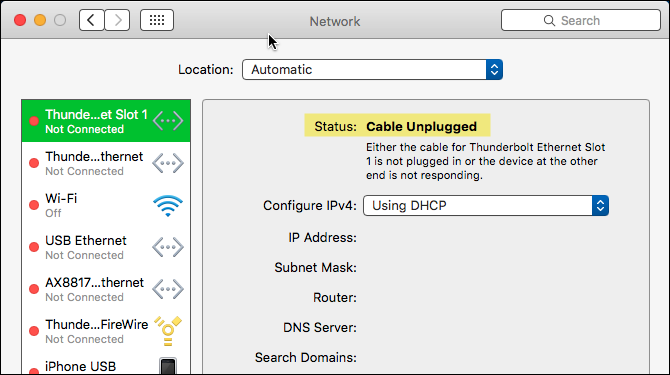 But I do NOT see this “Status” field/property in the Network Preferences service item.

and then search for

But I’d really like to have a direct AppleScript or ASObjC solution, if there is one. 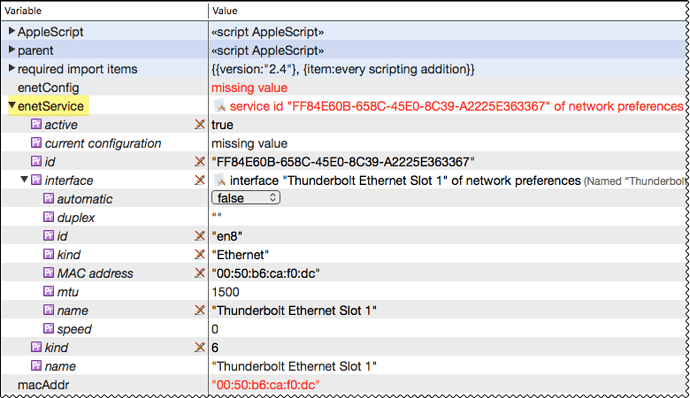 By my reading of System Events’ dictionary, it should be the connected property of a configuration. But with current configuration returning missing value and no configurations showing up as elements of services, my guess is that it has been removed deliberately.

There’s no ASObjC option either; the APIs are all C-based.

If it’s just for your own use, you can probably get something out of ifconfig -au – the -u limits it to connections that are up.

This works here, but obviously you’ll need a wider test base.

EDIT: though I may have misunderstood your need. This will test whether an ethernet device is connected to the mac (i.e, the ethernet cable is plugged in), but on reflection I expect you want to know if the ethernet connection to the internet is working. You’ll probably need a separate test for that, such as a ping to google.com or the like.

though I may have misunderstood your need. This will test whether an ethernet device is connected to the mac (i.e, the ethernet cable is plugged in)

Phil, you understood my need perfectly.

Thanks for your script, but unfortunately, it does not work for me. It returns true even when I disconnect the Ethernet cable.

It looks like you are looking for a match with “media subtype” from the system_profiler output. That returns three matches of “media subtype”, none of which are actually connected.

Here is an example output. I do NOT have a “Thunderbolt FireWire” attached, although the dock I’m using has a FW port.

Thanks again for your help.

If it’s just for your own use, you can probably get something out of ifconfig -au – the -u limits it to connections that are up.

Thanks Shane. I think that may be the ticket.
It provides an output that includes this:

The status: active becomes status: inactive when the cable is disconnected.

I’m working on a RegEx to parse the results, but this should work.
The en\d: and ether identify the Ethernet connections.

Almost all connections will have an ether parameter. even virtual ones created by VMware fusion have a MAC address, which is what the ether parameter shows.

in general, the first en* listing is the ethernet port, especially on machines with a dedicated ethernet port. So on my laptop, that’s en0.

on a machine with two, IIRC, those are en0 and en1.

If you want to be sure, you can do a combination of commands. First, assuming all you care about are en* interfaces, you could get a list of all en* interfaces:

which will return the number of en0/en1 type interfaces.

then a loop that iterates through those applying them to the netstat command:

That will return a “good” (literally) when the interface is up and off when it is down/no cable plugged in:

it’s an additional command, but it may be easier to grab the results from netstat than ifconfig.