I mentioned this in my review, but now after a couple of weeks of using SD, I’d say this is for me the biggest “missing feature” in Script Debugger.

Pretty much everyday I’m thinking: hellfire, I wish I could just put these two scripts side by side and scroll through them line by line.

My workaround is to open the other script in a new window then faff about trying to clumsily resize and rearrange them so they line up as best as possible. Also, with Sierra now defaulting to making Command-N behave like Command-T, there’s an extra step involved even in doing that (i.e., tearing the tab off to make a new window).**

I appreciate this is probably too big to make it into an SD6 maintenance update, but I really hope it’s high on the list of things for SD7.

**Aside: I don’t know whether it’s a good thing or not, but in Sierra SD ends up with two tab bars, as well as the possibility of multiple windows (each with all their own Sierra tabs and SD6 tabs inside them. Looks messy and confusing to me, but then Apple have really lost the plot with regards to UI design in recent years IMO anyway).

Have you considered writing a script to do the faffing? Not what you’re asking for, but perhaps a start.

And don’t take much notice of what’s happening in Sierra at this stage.

Have you considered writing a script to do the faffing?

Haha. Fair enough. Will do. I was looking for something to do this evening, anyway…

And don’t take much notice of what’s happening in Sierra at this stage.

Well, they announced at WWDC that tabs-not-windows would be the default behaviour for all apps, so I don’t think that’ll change as the beta develops.

I have a couple of scripts that I used for Script Debugger 5 that I hadn’t got around to updating for version 6 – turns out they don’t need any changes. And you can change from BBEdit to TextWrangler. Here’s the first one:

And the other just uses selection instead of source text.

Well, they announced at WWDC that tabs-not-windows would be the default behaviour for all apps, so I don’t think that’ll change as the beta develops.

What I meant was that SD hasn’t made any changes for Sierra yet. Apple’s suggesting apps that already support tabs can just turn off the new stuff, but our focus has really been on getting 6.0.1 out.

Right, fair do’s. I wasn’t suggesting you’d have made changes for Sierra. I haven’t done with my own apps and won’t till it’s nearer GM.

I’ve already got a short list of SD-things that I’ve found in Sierra that will need to be looked at, but I hadn’t intended to bother you with them until you release an official Sierra-supported release and I could see what hadn’t been addressed.

Feel free to send them along any time.

Have you considered writing a script to do the faffing?

So I came up with this:

It works, but it’s bit crude. The horizontal offset is pure guesswork. Is there any way to get the width of the text view that contains the script so that I can accurately position the new window (NB: this won’t work in Sierra for reasons mentioned above).

You have the bounds of the window, and tab width will give you the width of any pane that’s showing.

tab width will give you the width of any pane that’s showing.

Aha. Brilliant. That’s what I was looking for. Ta.

OK, should anyone else…wonder why I’m wanting to do this instead of just using the split pane: this allows me to now duplicate a script, and experiment in the mirror version without having the changes affect the original. When I’m done experimenting, I can now visually get an eyeball on the diffs and port any changes back.

I can also, thanks to Shane’s script above, get the diffs actually printed out. I’ll probably mess around some more to incorporate that as an option in my script which I’m running out of FastScripts…maybe I’ll even use a fancy Dialog Toolkit alert with it…

Just for extra giggles, if you put these into El Capitan’s Full Screen ‘split screen’ mode, you get an almost Xcode like effect (alas, you’ll have to imagine the graphical difference engine… 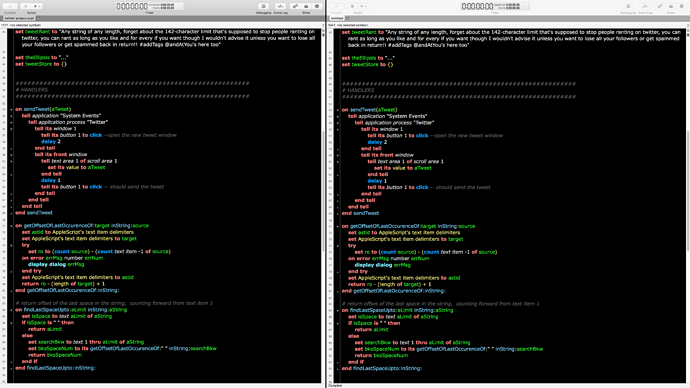 While it may seem like a simple change, this actually represents a massive alternation of Script Debugger’s document/window model. Like most document-based applications, each tab displays a single document. What you are proposing means that a tab must display multiple documents. This is in contrast to an application like Xcode whose main document is a project and source files are items within the porject.

For Script Debugger, this kind of change introduces many UI challenges. For instance, how do you indicate the document you want to show next to another document. When you go to close the window, are you closing both documents or just one. It goes on and on.

However, I think if we are to properly address the idea of AppleScript libraries we may have to move to a project-based model where you create a script project, and associate various source files (main script, libraries, etc) with it. Then, we can use many of the navigation techniques on show in Xcode. This also gives us the opportunity to introduce a build system and other project-level amenities. On the downside, this kind of change makes the Script Debugger UI just that much more complex and we already have a problem with approachability. This would also break Script Editor interoperability which is something I’ve tried to maintain through the years.

When I need to “diff” two similar scripts, which I do almost daily, I go for the powerful tool “FileMerge” that comes free with Xcode. It uses numbered, color-coded highlighting to show the differences. The two scripts are kept in sync through an excellent scrolling mechanism. Here’s an idea of what it looks like:

There are only two caveats. First, you must resave the scripts as text. That one is easy for me, since I store all my AS source code in text files. Second, be sure that both files use the same line endings, as those are annoying when highlighted.

A slight disappointment is that the familiar AS syntax formatting is absent. Despite that, FileMerge provides such a useful view of differences between the two scripts, that I’m okay with the generic font.

I hadn’t thought of utilising FileMerge. That’s another useful workaround.

we may have to move to a project-based model

Hmmm, in that case I might withdraw my feature request! I think that may create more problems than it would solve. Xcode is a different story and the project model makes sense because there’s always multiple files in even the simplest project, but the majority of scripts (at least that I write) are never going to need that overhead.

This reminds me of something I’ve always wanted (always meaning since I first started using tabbed windows).

I think it would be cool to be able to have more than one tab visible at a time. I could see this used in a text editor; a browser; or a script editor.