I’m putting this in the beta group to keep it more private.

This video demonstrates how to use [Script Debugger 6]( to explore application scripting interfaces. In this case we explore Apple Mail to discover how to save and process an HTML file attached to …

I’m working on a more comprehensive feedback, but wanted to share this one thing with you straight away: The “zoom to full screen” doesn’t actually use the full screen. It is still very hard to read your video. Here’s a reduced-size screenshot to illustrate the issue: 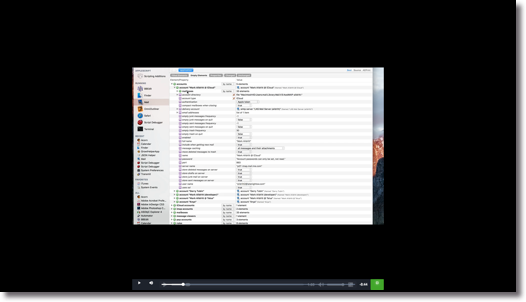 As you can see, most of my actual screen is black. The video did not do as all other videos I have seen when chosen to view “full screen”

However, the same issue exists in Safari.

The video has a native resolution of 1008 x 630. I suspect the scaling problem is a limitation of the video player I’m using.

Looking back at this, I see all kinds of content issues I would like to improve. The most important one is that only about ¼ of the video is actually about application exploration. The balance is about debugging.

I’m in the process of rethinking my video tutorials with an eye to making them more effective. I’ll see what can be done about the scaling issues you found.

I looked at your video. The video in many ways is better then I’m used but I agree with Jim the small size is a problem. If someone was far sighted or had cataracts they would be out of luck. When the video zoom out I found myself leaning forward to get a better view. I wondered if it might be better to have the video come up in its own window where there would me more room for the video to expand into.

But the biggest things that drives me crazy about tutorials is when people do a tutorial without being prepared. In that respect your video was much better then most I see. Your voice was friendly. You sounded confident and you sounded like you kew what you were doing. The video moved along well at a even pace that was at a good speed. But most of all the professionalism that came from what I’m assuming is being prepared before the video started was so much better then then people jumping back to something previous because they forgot to mention it, fiddling on the screen to get something to work for way too long, … The single best things was your voice sounding confident. A tutorial that goes smoothly and with a speaker that sounds knowledgable and confident goes a long way towards giving the viewer the confidence to try out what they learned and deciding if other videos are worth watching.

But the biggest things that drives me crazy about tutorials is when people do a tutorial without being prepared.

Thanks. I script my tutorials before I begin and they are heavily edited. It takes more time to produce them, but I think it is a better approach. I’ll try and zoom in more closely. Its difficult when working with the Explorer because I find I want to show as much context as possible. The Explorer in a small window is a poor experience.

Anyway, thank you for the feedback. I’m working on more videos in the hope of easing the transition from the Script Editor to Script Debugger.

So I watch the videos with an eye towards determining how true the statement in that paragraph is about also applying to SD 6.

In your ASObj-C video the big thing I noticed was you didn’t mention key presses. I seem to remember you talking about the escape key once in the video but it was after you had already done some code completions. Everything else was ok. While all that is in the SD 6 documentation it seems to me the videos are targeting users not very predisposed to reading the manual. Pressing the escape key is a feature of “code completion” not “ASObj-C” but in practice using “code completion” is very much part of the process of using “ASObj-C.” But this is more of a judgement call then saying it needs fixing. As I said “code completion” is not a feature of “ASObj-C.”

There are some minor differences in the menus and some icon changes that I don’t think are a problem. But in the “AppleScript power features” video the manifest is not the same in sd6. I could see a user trying to figure out how to bring up the “search www.osaxen.com” database section at the bottom of the manifest dialog just like in the video. A new user could find that confusing. Also the video doesn’t show or talk about “Framework Dependencies” or “Script Library Dependencies” while being complete in the coverage of other things of equal importance. Again this is a judgement call.

The show progress isn’t mentioned in the video while things of the same importance are mentioned.

In the “Running a Script” video where it talks about “persistent properties” would at best be confusing for a experienced user of SD5 or Script Editor but it could also be misleading. Unlike previous observations I’ve made here I think the words used in the video could lead some people to the wrong conclusion. The video was done for a different version and the words spoken are a problem now.

The biggest difficulties about problems with the old videos is that Matt did a very good job with them. The voice was perfect, pauses in speaking were great, …… and it would be nice to keep those old videos.

Perhaps the videos could be edited to remove the parts where the “manifest” and “persistent properties” are talked about. The the 2 end pieces of the video can be joined for “AppleScript power features” and “persistent properties” and they can be be named “Running a Script in SD 6” and "Persistent Properties in SD 6. The original videos could be rename to “Running a Script in SD 5” and “AppleScript power features SD 5.” Later you could create the video equivalent of an addendum and create a video talking about “Manifest,” “Persistent Properties” and “Show Progress” in SD 6.

A quicker and easier, although less clean, solution would be to add something to your “note” on the tutorials web page that explains the differences between the “manifest” and “persistent properties” for SD5 and SD 6 the same way you explained the difference with script libraries so the SD6 user would not to apply that stuff to sd6.

The fastest solution, although less complete, is to add something to your “note” on the tutorials web page that says persistent variable have changed in sd6. Then the user can read more about the difference in the manual or learn the hard way.