EDIT: Ignore this report, unless it’s somehow useful. When I closed down SD and restarted it, the error described below did NOT occur. Stranger and stranger…

This is very, very strange, and it will take a moment to explain it. I have an ancient AppleScript app that uses code I wrote a dozen years, when I knew even less than I do now. 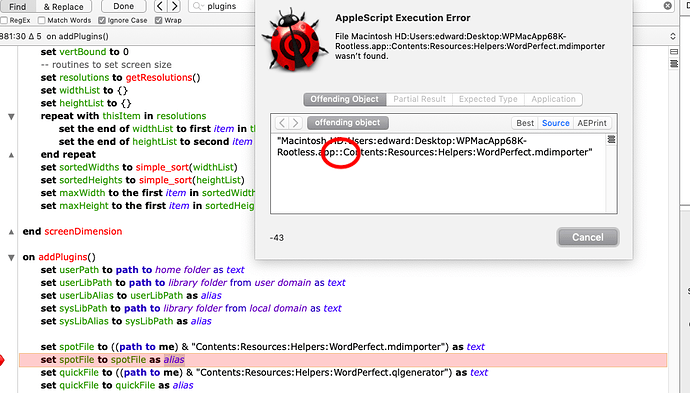 Probably there is a feature in SD that I don’t know about that is causing this, and it’s another instance of user ignorance, but I’d be grateful to know if there’s a workaround.

FWIW, your code is potentially problematic. When you say:

what happens is that path to me returns an alias, the alias and “Some string” are concatenated into a list, and then that list is coerced into a string. As well as being inefficient, it also means the result depends on the state of text item delimiters. If your TIDS contain “:”, you would get the result you saw.

You should be using:

That means there is no coercion involved, no list is created, and no text item delimiters are involved.

A thousand thanks for this! My guess is that it explains some weirdness I’ve encountered in my scripts where a global variable that I set in that problematic way didn’t work inside a function, and I worked around the problem by setting the same variable again inside the function. Perhaps the coercion failed when the function read the variable? That’s just a guess, but I’ve gone through a dozen scripts and fixed this.