This is my first post in this forum, so let me say hello to everybody.

As usual, as a newbie I’am coming with a problem. Coming from Apple’s Script Editor, I recently bought Script Debugger 7 and I’am very impressed about the tool. Scripting Apple Script is surely much more fun using Script Debugger. Especially the Enhanced Applet got my attention.

I’m stuck with this Error:

This error occurs, when dropping files onto an unmodified Enhanced Applet from New Script From File... -> Enhanced Applet with the option Handle Dropped Files enabled. The offending code line is #41

If if do drop the files onto the Script Debugger as shown in the very nice tutorial video, the script runs to completion without error. If the script ist started by double clicking to get the droplet window, the script runs in the error given above. It doesn’t matter if debugging is used or not. By the way, the script, as also all test data files do reside in my home folder, so file access rights shouldn’t be the source of the problem. 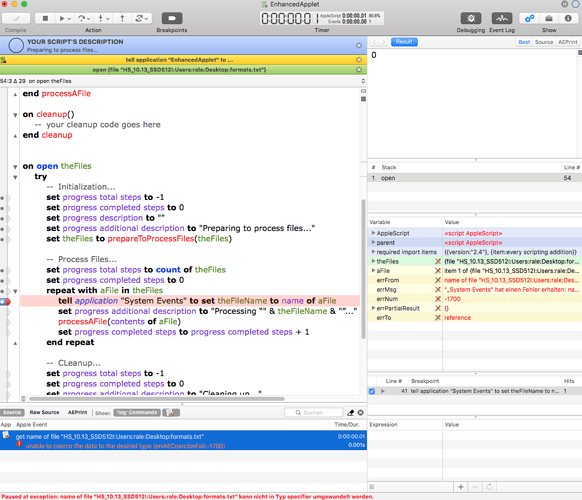 How to reproduce the error

To reproduce the error do

For any help I’am very thankful in advance

The problem is that an Enhanced applet receives dropped files as file references while a standard Apple applet receives them as aliases. Most of the time this difference does not matter, but System Events appears to require aliases. You can change your script like this to avoid the error:

Yes they do. All applications need to be code signed.

Hello Mark!
Thank Your for the quick reply.

This solved the problem

Is there any possibility to mark this thread as ended successfully ?

P.S.
found the checkbox for Solution