Does anyone know of an email client with good AS support?

One of the main reasons I’ve stuck with Apple Mail all these years is because of Mail Rules and the general scripting support. Alas, today I’ve just had one too many problems with Mail and Gmail IMAP accounts, and decided I’d better look for something else.

Outlook is ruled out (price)
Postbox has scripting support, but annoyingly doesn’t let you get the msg content

Thunderbird has no scripting support.

I found something called gyazMail but it looks too amateurish and untrustworthy.

EDIT: Airmail does not support any kind of mail rules, but has good AS support.
I might be able to work with this actually, unless anyone has any other suggestions. 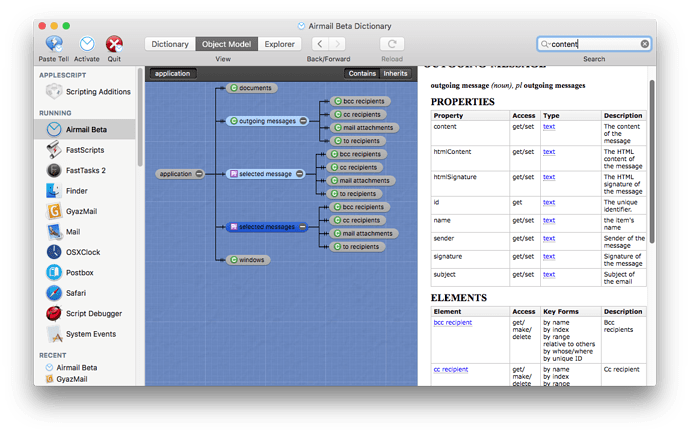 Without doubt - “Mailsmith”, think BBEdit as an email client. In fact, the application started out as as a software product from Bare Bones Inc. You can find it here: https://www.mailsmith.org

Oops, forgot to mention, it is a text based email client, with no direct support for HTML but can display HTML mail as as attachment.

Outlook is ruled out (price)

It is too bad you have ruled out Outlook. I’m pretty sure that it comes for free from any email provider that uses Microsoft Exchange Server. Of course, it comes with Microsoft Office for Mac Home and Business 2011, which costs only $60.

It has excellent scripting support, both AppleScript and VBA.

I have used Outlook 2011 Mac for years, and really like it.
Of course, Outlook is much more than an email client. It is a full PIM (Personal Information Manager).

Maybe I’ll look into a way to get it that won’t break the bank.

The thing is for me, I’ve tried abandoning Mail before, and I always end up back there for one reason or another. That makes me reluctant to invest ££ if it’s not going to be a more-or-less long-term solution.

I need something that’s at least as capable as Mail - and I make heavy use of Mail Rules, but I can automate my tasks without them so long as there’s native AS support - and ideally less temperamental and with a few more power features. Otherwise, I’m just throwing money around without gaining any real benefit (not something us Yorkshire folk are renowned for unless you happen to be running a brewery…

It is too bad you have ruled out Outlook.

I’m not in love with Microsoft products*, but I must agree with that.

All those little mail clients are buggy, miss some important feature or vanish after a couple of years.
Remember Sparrow!

Take a look at Office 365 Personnal.

If you’re a professionnal, it’s not a big invest.


* I don’t hate them neither. As a graphic designer, I’m using Word and Powerpoint every day.

f you’re a professionnal, it’s not a big invest.

I try to avoid that moniker. Both because it entitles companies to charge you more for the same product and because the overtones of responsibility it carries spoil the fun of me mucking things up.

It’s taken me a couple of years to get out of the Word/Excel world; I’m not sure I want to get back into it for the sake of a better email client, but I’ll bear it in mind. Thx.

Minor correction: Outlook 2016 on the Mac doesn’t have VBA support. That’s probably a good thing, given that it’s caused so many problems for Outlook Windows over the years that using it at all is a multi-hoop obstacle course

I too use Mail and have recently acquired MailHub which is a beautiful and powerful addition to Mail (see here http://dervishsoftware.com). It completely reinvents mail management (and for me its model maps 1:1 with my project folder hierarchy, linked by Applescript). I’m not saying it solves your core problem by it may…

For over a decade I’ve used Apple Mail with the following plugins:

I have 9 manual rules at present.

I use MailHub for most of my filing needs and especially like its auto-suggest-location feature – hit a keyboard shortcut, and your message is filed.

I also have 50 AppleScripts for Mail and 28 Keyboard Maestro macros.

All of that makes for a fairly full-featured if not fully satisfactory mail client.

Airmail does not support any kind of mail rules

I’ve been watching Airmail, since it came out.

I think it finally added POP3 support in version 3, which is when I got actively interested. That said it has a long way to go before I would consider switching to it.

Sorry Chris, I should have been more specific. I meant it doesn’t support any rules for running AppleScripts. This was confirmed to me by Airmail support.