Double entries in SD8 dictionary for some libraries

This is a minor thing, but I’ve noticed that there are two versions of some script libraries in the Dictionary App pane.

I think the Icons are telling which is where but I’m not sure why some are showing me two versions and some aren’t. 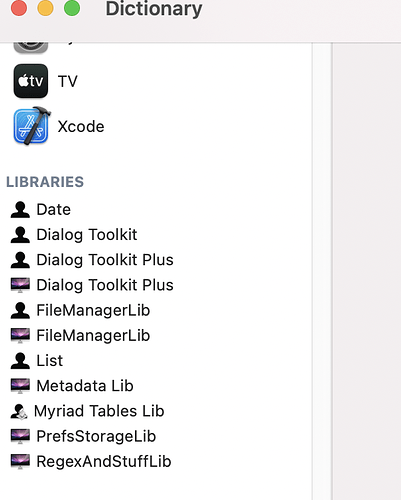 If you go to Help, it will list the places searched. Any found in those places should be listed. Tooltips will display their paths, and you can control-click to reveal them in the Finder.

Each of the duplicates are in both places (system and user).

Thanks, I wonder why others that are in both don’t show up as duplicates.

They’re not in subfolders, perchance?

Nope. All in the top level of the folders. There are no subfolders (except your applet)

But the same version of another that is duplicated:

But two different versions for one that is not duplicated:

Moving forward I’m moved all libraries to the user Script Libraries folder, and only kept the latest versions.

I just now noticed that only one of the libraries from the Script Libraries Pack application is appearing in that list. (MyriadTables).

I confirm that SQLite Lib2 and BridgePlus are installed and available. But since they’re in the pack I guess the only way to see their dictionaries is open the contents and drag and drop from inside the app onto the SD Icon, then add as favorites?

That worked, but I think that part of the dictionaries window needs work.

That said, I can tell you that’s a pretty handy feature. I had written a script in the script menu to chose a library to open from a list, but this is much smoother.

I confirm that SQLite Lib2 and BridgePlus are installed

Where are they installed?

What I meant by that was that I could confirm they are working.

You did notice that the version appears in the window’s title?