Display gets whacked after switching to other apps

I’ve had an issue twice now where I have more than one script open, then I switch to other apps and do some stuff, then go back to SD and the windows are completely whacked. The first time (while in debugging mode) there was just artifiacts all over. Dialogs wouldn’t display, they’d just be dark boxes. The close window buttons did nothing. I was able to quit.

When I relaunched, it seemed normal, but after working with other apps then going back to SD (not in debugging mode) a very similar thing happened. Instead of artifacts the windows were all blank. Everything else was the same, couldn’t display dialogs or close windows, but I was able to quit.

Third time it hasn’t repeated, but if it does I’ll take a sample and screen shots.

OK, similar, but not exactly the same. I was step debugging a longish script, when I started folding handlers. Then this happened: 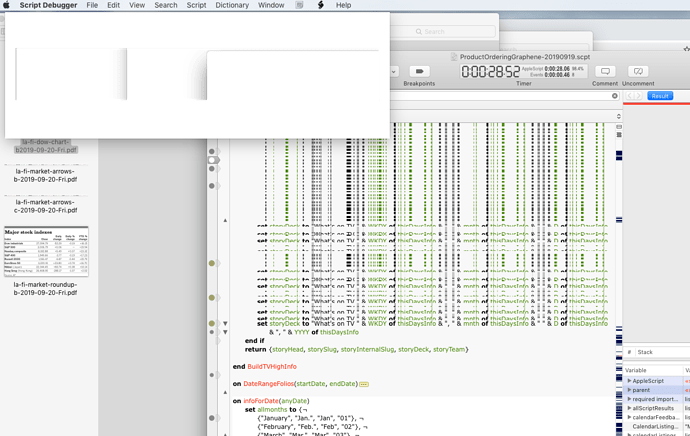 The white box with the artifacts was flashing on and off, and the mac was beeping. After several tries of clicking control-. and hitting return it stopped. I tried to close the document and a blank dialog appeared, presumably asking if I wanted to save. I hit return and it saved but didn’t and wouldn’t close. I quit SD and the document closed. I also took a sample, I’ll try to link to it

This time I opened the same script, did select all and folded handlers and the display froze. After a bit the handler folded, but the text went all artifacty almost as bad as the screen shot. I tried closing the window and after a couple minutes it closed, but I couldn’t open any windows or do anything but quit SD.

I’m going to turn off code folding on that script and see if it makes a difference.

Please make sure you are running the latest 7.0.9 beta:

A new Script Debugger 7.0.9 BETA build is available. You can download it here: http://www.latenightsw.com/archives/beta_for_script_debugger/ScriptDebugger7.0.9-7A92.dmg Changes for build 7A92 1309: The breakpoints list now respects the Outliners/Inspectors font size preference in the Fonts & Colors preferences panel. 1313: Resolved a crash that occurs when find-replace all operations operate within folded regions of text. 1286: Resolved a series of issues with code folding following a …