I have a script that runs a unix executable, and I want the script to decide which executable to choose, depending on whether it’s running under Apple Silicon or Intel.

On my borrowed Apple Silicon machine, I enter in the terminal uname -m and get the result arm64.

So, using SD7 on an Apple Silicon machine, I enter

My app that runs the unix executable can’t be edited in the Script Editor (too much stuff in the Contents folder, maybe), so I tried copying its main.scpt in to the Big Sur editor and exporting it, and then copying the exported script back into the app - but that continues to give x86_64 as the architecture, perhaps because the original droplet was made in that architecture.

Is there a better way to detect which architecture the current machine really is? Or should I wait until SD 8 arrives? (I’ve requested beta access.)

If you are running an Intel-only app on M1, then its child processes will inherit that as well.

For example, if I tell use ‘Get Info’ on iTerm.app and tell it to “Open using Rosetta” as shown here: 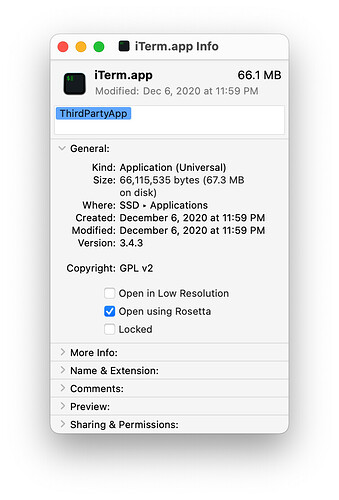 (This is also how people are getting brew to work on Apple Silicon… telling iTerm or Terminal to run under Rosetta, and then brew installs x86_64 utilities.)

So until there is an Apple Silicon version of Script Debugger, you’ll get an Intel result.

It might be possible to find a file which exists on Apple Silicon Macs that does not exist on Intel Macs. For example, the file /System/Library/Extensions/AppleARMPMU.kext/Contents/MacOS/AppleARMPMU seems like it might be one.

Since all current M1 Macs have an M1 graphics card, you could run this command:

and see if you get Apple M1 as a result. If yes, you are on an M1 Mac. That may not be useful in a year or two, but it’s an option for right now at least.

Thank you for these. I will experiment and report.

My AppleScript app runs the DOSBox-X unix executable, and in the app I’m experimenting with, that executable is arm64-only. Even though it’s launched from my Intel app, the process itself is native M1. This may be a weird special case.

I like your Alternative 1 - it’s likely to work a year or two from now, when I’ve forgotten why Alternative 2 isn’t working…

You could get the architecture a known app, like Finder, is running on:

That method works. Thank you. I’ve now got my application running one of two different unix executables depending on the architecture.

Here’s an arm64-only executable, compiled on an arm64 machine, in case anyone wants to look at it:

I meant weird in the sense of weird to not to distribute a universal build.

Another alternative is to use lipo to create your own universal binary.

Ah - thank you! I didn’t know about lipo - will experiment.