I’ve had a couple of support emails recently on this topic so I’m documenting it here for everyone.

Script Debugger’s Execute, Trace, Step Over and Step Info menu commands have submenus where you can select an AppleEvent to simulate. In the case of Folder Actions scripts, you can use any of the items in the Folder Actions submenu: 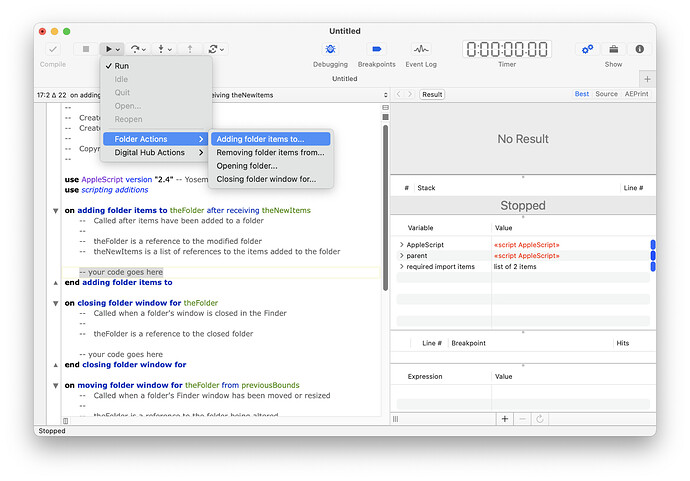 The items in the Folder Actions submenu are enabled if corresponding handlers exist in your script.

Depending on the event you select, Script Debugger may prompt you to locate the folder or file that is the subject of the event.

NOTE: My previous answer for this issue is obsolete:

How to debug a Folder Action Script Script Debugger

Hi everybody. I´m writing a script about adding items to my downloads folder to automate a workflow. The script is located at the Folder Action Scripts folder insider the Library folder of the disk, and It is attached to the downloads folder and “it works”. What happens is that I have difficult problems to debug it because when the script runs I can´t see where´s the problem in Script Debugger. I mean, I can put dozens of “display notification” to find out where the problem is but maybe there…

I found the existence of “moving folder window for” event handler in Folder action script’s document.

It seems not working for a long time. SD has no “moving folder window for” debugging menu item.

Is “moving folder window for” event handler not working for a long time ?

This event, as far as I know, has never worked. The documentation for the moving folder window for event handler is marked as Not currently available.

This is why we don’t offer a debugging facility for this event. If you wanted to, you could define a handler for this event and then create an on run test rig to invoke the handler with known inputs.

Yes. You’re right. I wanted to know the acknowledge about this events not work.
Thank you!