I’m really confused. I can’t seem to get the result panel to show any … well … results of any kind. See screen shot.

I’m currently stepping through a script. I’ve just set two variables: theSelection and theLinesList. Neither shows anywhere on the right hand side. From all the videos and tutorials I’ve seen of Script Debugger, my understanding is there should be the result of the last most recent command run displayed where “No Result” shows in the screen shot in the top right. Also I’d expect a list of all current local variables to show up somewhere in the variables list section about halfway down the right hand side.

Also, I get nothing at the end. I’m used to (Apple’s) Script Editor. It doesn’t have step by step debugging, but I always get the result of the last command shown in the Result section below a script’s source code in its Script Editor window. In Script Debugger I get nothing.

I’ve reviewed the Preferences as much as I can. I see under the “Execution” tab a section titled “Show result when scripts pause or end:” I have that set to “Show Result Inspector”, but I’ve tried all four settings with no difference in behavior. As I understand it though, that setting is about making visible one of those methods of presenting the result, if it isn’t already. If I have Result Inspector chosen, and the Result Inspector is already visible, I believe that setting doesn’t do anything, right?

Driving me nuts. Is there something I’m missing? Have I found a bug? Is there a setting somewhere else I need to set?

Script Debugger seems pretty awesome, if only I can get it to do this - arguably it’s most significant feature?

I’d appreciate any help. Thanks! 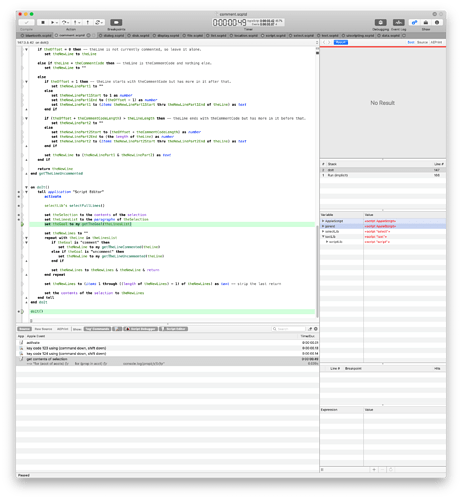 Script Debugger should be displaying the result of each statement to you as you step through your code.

Lets start with something simple and see if that works:

With debugging enabled (Command-Shift-D), when you step through the code you should see the results of each statement appear in the result area: 100, "Hello World and date.... 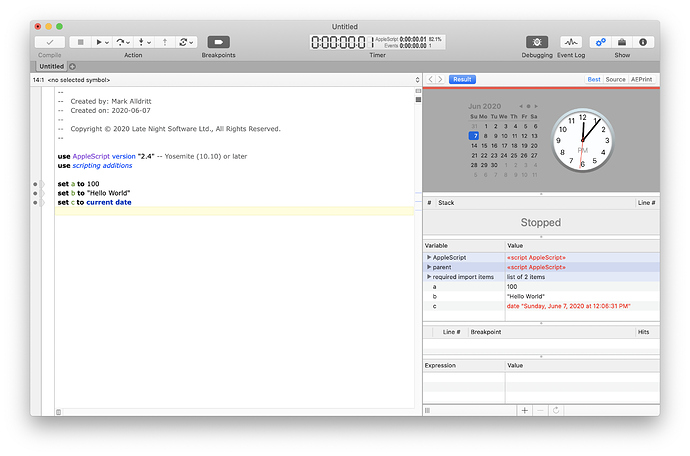 Does this happen when you try it on your system?

Hey @alldritt. Thanks for the quick reply.

What you describe is what I thought it was supposed to be doing, so at least my understanding seems correct. Unfortunately, it’s not what’s happening on my system. Screen shots attached. 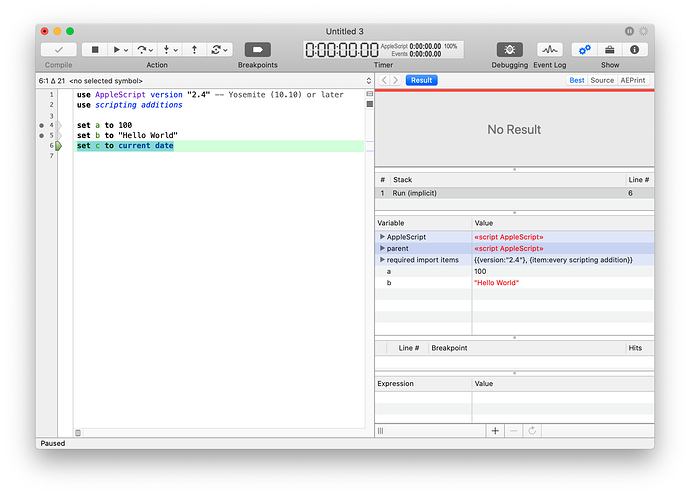 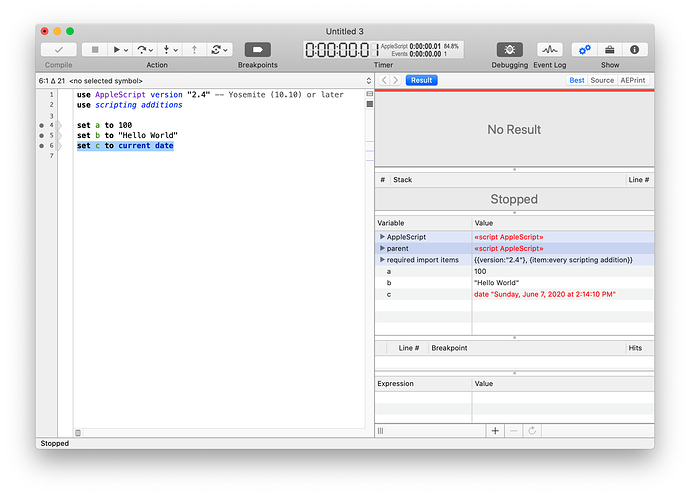 I’m at a loss to explain why Script Debugger is failing in this way on your system.

Please open up the Console application and check if anything useful is being logged there.

Don’t you have forgotten to change tell application "Script Editor" to:

Apologies for taking a while to reply. Things suddenly got very busy for a bit there.

Needless to say, I’m not quite sure what happened, but a day or two after our exchange above, it just started working as you describe. I have no idea what I did or changed. I’m sorry I can’t say more in case anyone else ever has this issue and might draw on this experience.

Needless to say thanks for your really prompt replies. Really liking Script Debugger now. I’ve had a couple of other small issues (possibly bugs?) here and there, though can’t remember off the top of my head right now what they were! I’ll post questions/reports about those as I find them again.

Thanks for the tip, in case I’d missed it, but yes and no. This is a script I’ve been writing for a while (before I discovered Script Debugger) and it’s specifically for scripting Script Editor. After discovering Script Debugger, I wanted to finish it for Script Editor before adapting it. That said…

Its purpose is to add keyboard equivalents to Script Editor of what’s effectively Script Debugger’s “Comment” and “Uncomment” menu commands. I do a lot of JXA scripting as well as AS, and Script Editor is the only app I know of for coding JXA. So I still need Script Editor for that.

That said, I also happen to have a preference for one keystroke to handle both Comment and Uncomment, and have it intelligently figure out which operation it needs to do, based on the context. This script does this for Script Editor. Script Debugger distinctly has them as separate commands. After I get this script right and finished for Script Editor, I may adapt a version of it for Script Debugger to have the “one keystroke to handle both”…

I’ve been noticing issues with results not showing lately and quitting and restarting SD seems to fix it.

Yesterday I noticed that when the result wasn’t showing the dictionary explorer wasn’t working either.

Quitting and restarting SD worked in both cases.