Can we do this in a Xcode project, giving an array of strings instead of the dictionary? 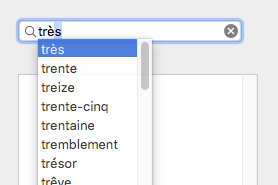 You can, although it’s not a trivial exercise. Apple has some example Objective-C code here:

You basically do it by implementing the last three NSControlTextEditingDelegate methods in that example.

Can we do this in a Xcode project, giving an array of strings instead of the dictionary?

FWIW, this is very easy to do in HTML with JavaScript, and there are lots of examples and libraries available. For those that are interested, Keyboard Maestro offers a Custom HTML Prompt action that makes this pretty easy. Also lots of help and examples in the KM Forum Posts about HTML Prompt.

FWIW, this is very easy to do in HTML with JavaScript,

Thanks Jim. But I prefer to the challenge that AppleScriptObjC in Xcode represents to me.
I have several apps that I’ve made with Applescript Studio in Xcode 3.6.
Those apps are still running but I want to add some features and maybe improve their UI.

it’s not a trivial exercise

Ouf! this is high level!

Actually, I think I may have misinterpreted what you want. You have to do all that if you want autocompletion, but if you just want different alternatives to appear when you hit the F5 key, you only need to implement control:textView:completions:forPartialWordRange:indexOfSelectedItem:.

Here’s some code, assuming you’ve made the app delegate also the delegate of the search field:

That’s sounds better.
Even if it’s what I’m trying to do since yesterday (before asking here).

I don’t see where to implement this method.
I thought applicationWillFinishLaunching: was the good place but I can see that it’s not.

And the method itself is totally opaque to me: the only parameters I’m able to set are indexOfSelectedItem: and completions: !!!

I don’t see where to implement this method.

It’s a delegate method. Presuming you have just an app delegate class, you put it there. You then connect theSearchField as an outlet to the field itself, and set the app delegate as the search field’s delegate (control-click, then drag from delegate to the app delegate).

And the method itself is totally opaque to me: the only parameters I’m able to set are indexOfSelectedItem: and completions

You don’t need to set any. You need the control in case several fields use the same delegate, you need the text view to get its string, and you need the range, so you can work out the start of the current word. The completions passed to you are the default values, so you can do something like add to them rather than replace them, but you’re probably just going to ignore the parameter.

If you want to change the selected index, you have to allow for the fact that it’s an out value, and set its contents. Here’s a trivial example you can insert into the above code:

It was my first attempt. on control:…
But as I was trying to set the parameters, the method was preventing compilation.
I thought I was on the wrong path…

You don’t need to set any.

With your code under the eyes, it seems obvious.

Can I ask one more question?
Is it possible to send the action continuously, while the user is typing (the equivalent to controlTextDidChange)?

Is it possible to send the action continuously, while the user is typing (the equivalent to controlTextDidChange)?

You will need to implement controlTextDidChange:, probably like in the example I pointed to above. You’ll possibly need control:textView:doCommandBySelector:, too. (I’ve only done it in text views via subclassing, which is probably even more complex in this case.)

Is it possible to send the action continuously, while the user is typing (the equivalent to controlTextDidChange)?

sendsWholeSearchString
Property
A Boolean value indicating whether the cell calls its search action method when the user clicks the search button (or presses Return) or after each keystroke. 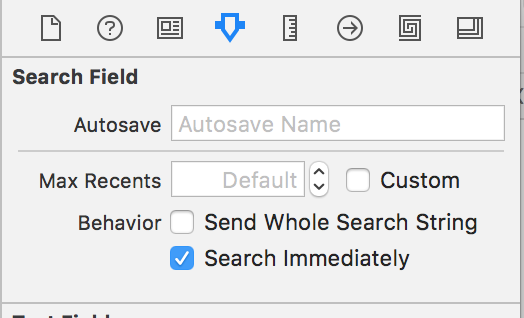 @sphil
Can’t make it work.
Maybe because the search field is bound to the application delegate.

@ShaneStanley
All my attempts ends up with a stack overflow.
The action is sent when entering the first char and won’t stop until it overflows.
The first entry is displayed, selected and copied in the field. 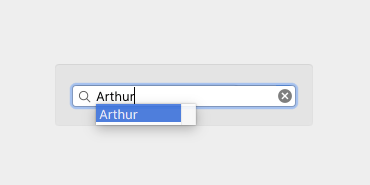 I think he’s after the completion to repeat, not the searching. If so, he probably wants that setting off.

My main mistake in converting the Apple’s example was that I misunderstood the term !self.
I did not see that ! means not.
Inevitably, if the completion is repeated while completePosting is true, it will never end!

Even if my knowledge of ObjC has improved, I’m still a newbie!