I have a script that ‘talks’ with Indesign CC 2017.
something like:

after saving it and reopening it auto change to:
using terms from application "Finder"
every time.

I need to use using terms from application “Adobe InDesign CC 2017” in certain circumstances because otherwise certain InDesign commands are not recognised.

It’s something that’s only happening in SD6 i never had the problem in the previous version of SD.

I never needed the «use terms from…» command with Indesign.

it auto change to:
using terms from application "Finder"
every time.

It sounds like you accidentally chose Finder in the missing application dialog at some stage.

Open ~/library/preferences/com.apple.applescript and delete the entries for ApplicationMap.

Just checked that plist but no indication in it of a ApplicationMap just color settings.
The suggestion of Jonas sometimes work and in other circumstances I really should add teh using clause… see screenshot 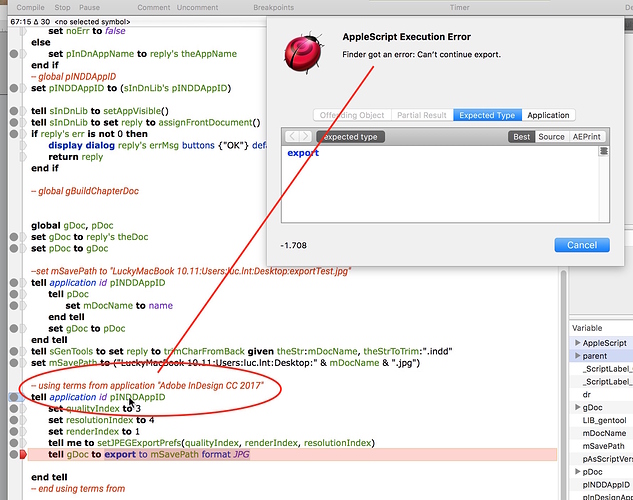 What’s in your sInDnLib?
I mean: what’s your code to get the Indesign ID?

And in the setJPEGExportPrefs handler, is the JPEG export range property set correctly?

Try this script on a test document and let us know if it works.

Thnx Jonas,
The issue seems to be that you can’t assign the application ID as a property or a variable and that’s what I’m doing.

But why the using terms is still chnaging to “Finder” remains a mistery. The idea of Shane wasn’t applicable. It’s something that only happens with InDesign CC 2017 and a imported qcriptlibrary in which I have all the common code for InDesignCC 2017.