I’ve been trying to create a system service in Automator using Shane’s Data Detectors ASObjC code. It runs fine with sample text in Script Debugger, but when I try it in Automator I get the lovely error message in the screenshot. Anyone know if there’s a workaround? 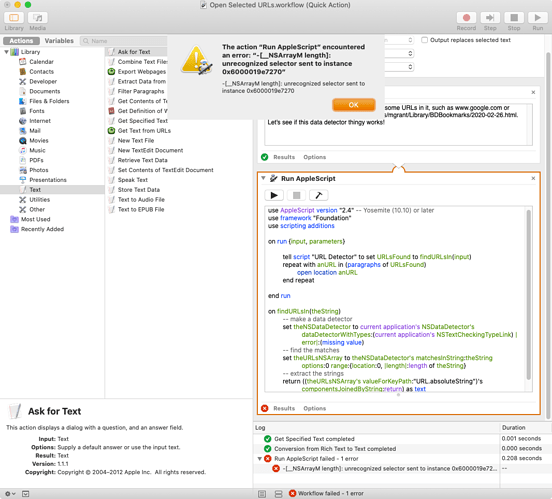 (Just realized that part of the script in the screenshot was from an attempt to call the data detectors handler from a library script, but it doesn’t work either way.)

Just one string, the “Get Specified Text” string for testing purposes, or the selected text when it’s actually run as a service.

BTW I have found a workaround via Keyboard Maestro in place of Automator, but only by using the clipboard, which I’d prefer to avoid if I can.

Aha, you’re right. Coercing it to text before passing it to the handler seems to have done the trick. Mucho thanko!