A new Script Debugger 7.0.11 BETA build is available. You can download it here:

I opened an Applet that I’ve been using for months, and noticed a code folding issue.

First, due to previous issues I had View Code Folding off on this system. But in the script for this applet one of the handlers was folded when I opened it. It had the ellipsis (…) symbol, but no triangles. I turned on View Code Folding, and the triangles appeared with this handler still folded (all the other elements were unfolded). Clicking on the triangle for the folded handler did nothing. Code folding worked properly for all other foldable elements. 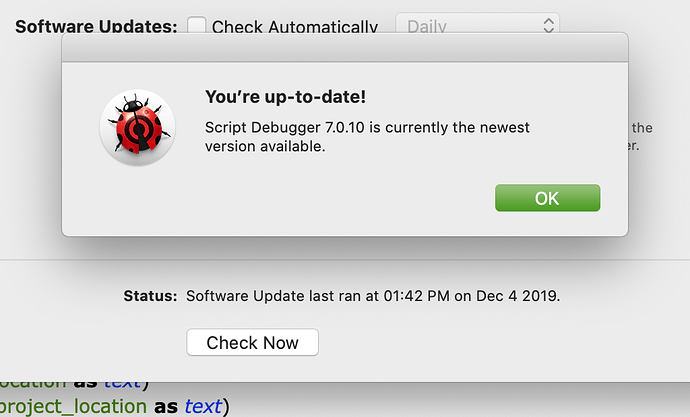 Here is what I get

That’s correct. The beta version needs to be downloaded using the link above. Only release builds use the auto-update mechanism.

Thank you Shane. I must have forgotten about that, especially since BBEdit uses the same mechanism for both the release and the beta versions.

I’m not sure if this happened with the latest update or the previous update. I’ll check on my other installations shortly.