I’ve noticed at least a couple of people mention this in other threads, including:

Is it possible to call javascript from AppleScript?

@alldritt, it would be totally awesome if Script Debugger would also support JXA scripts. I don’t know about anyone else, but I would be more than willing to pay 2X for a SD that supports both.

I second this. I’ve used AS for years and am pretty proficient at it, and am now getting into JXA. I just discovered Script Debugger recently and am very impressed, except disappointed that I can’t now use it with my new JS goals.

So yes, I too would be more than willing to pay more for a SD that also supports JXA.

Could this happen anytime soon?

You can already debug JavaScript for Automation (or any other JSContext instance, for example the JSContext embedded in TaskPaper) with the Safari Debugger. 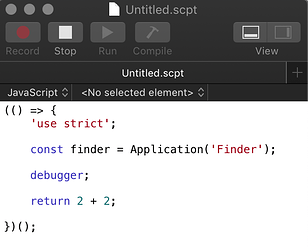 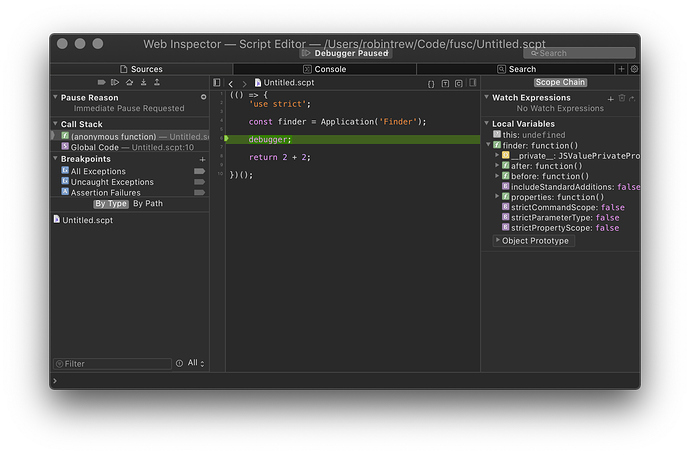 Fascinating. I thought something like this might be possible but I never investigated it fully. It’s not terribly convenient but it does let you at least see what’s happening.

@ComplexPoint Not sure if you’re suggesting this as an alternate solution (one I’m aware of, for the record, but thanks for mentioning it in case I wasn’t, and/or for the benefit of anyone else who isn’t), or if you’re pointing it out to show the tech exists for @alldritt to adapt into SD.

Of course I’d much prefer the latter - a single comprehensive app for all our macOS automation needs in one place (…and perhaps it could be made extendible [if that’s the word?] if Apple were to add other languages as peers of AS and JS in the future)…?

On the horizon - QuarkXPress 2018 and other JavaScripts Script Debugger

The short answer is no, we are not going to develop a version of Script Debugger for JavaScript. I last dealt with this issue publicly back in December 2014. I can’t believe it’s been so long since Apple introduced JavaScript for Automation (JXA). While there has been a lot of recent activity with JavaScript automation, both on macOS and on iOS, little of it has anything to do with Apple’s JavaScript for Automation. For instance, the Omni Group has done a fantastic job of integrating a JavaS…

My stance is unchanged.

Fascinating. I thought something like this might be possible but I never investigated it fully. It’s not terribly convenient but it does let you at least see what’s happening.

It’s pretty good actually, once you have made yourself at home with it …

(Though I find I’ve needed it much less since I gave up using variables – nothing much to watch if all names are either constants or arguments : -)